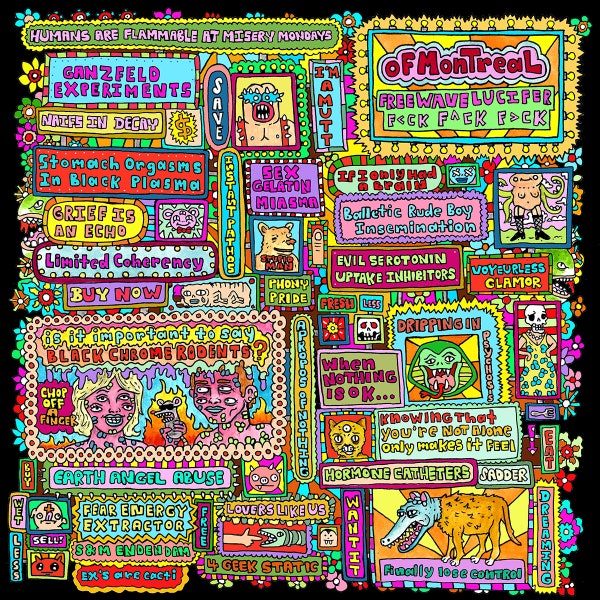 The past two years have been difficult. The pandemic forced most of the world’s population into quarantine, which left many in a depressing isolation. Being without human contact resulted in a collective state of abysmal mental health, as well as trauma. This experience wasn’t any different for Of Montreal’s Kevin Barnes, who set out to compile their personal sentiments of the pandemic into the group’s newest album: “Freewave Lucifer fck fck fck”.

Barnes challenges listeners to interpret the album based on the emotions it invokes, rather than attempt to deconstruct their words anåd make meaning out of that. Similar to the surrealism of David Lynch’s films, the album could mean anything or everything; it’s up to the audience to decide what the 90’s disco hooks and stilted storytelling is intending to say.

The record takes on a plethora of despondent topics ranging from the death of two beloved characters in Barnes’ life (their mother and dog of 15 years), the switch from alcohol to marijuana and the sonic feelings of inebriation, the political atmosphere of the United States, and the general challenges of grief, trauma, and isolation that came with the pandemic. Barnes tried to semi-coherently express these themes with an added effort to sound a little more uplifting in a cathartic array of synthpop shimmers, keyboard runs, and guitar melodies.

Barnes also mentioned that they made a point to write just a little bit of the record every single day— and you can feel the layers of writing over and over in each song. The sets of phrases were arranged accordingly and came together, like magazine cutouts in a collage. The resulting piece became a swirling tornado of epiphanies, emotions, and expression.

Inevitably, with an album as exploratory and experimental as Of Montreal’s latest, there are going to be people who just don’t get it, and understandably so. It’s a daunting task to travel through Barnes’ musical journey and try to understand what is happening, especially without any context of the band and Barnes’ personal experiences throughout the pandemic. Nevertheless, for some the album is an endless, restless, masterful collage of shiny and symphonic instrumentalism and daringly ambitious storytelling. There is no doubt that what Barnes has created is truly a work of art. While many see a pile of detached puzzle pieces, the select few can appreciate the magically bizarre universe that “Freewave Lucifer” has crafted.