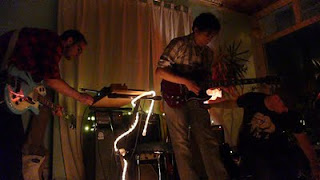 Monday September 19th from 3pm -5pm New Shit Radio will lend the airwaves over to the montreal based distorted harmonic trio AIM LOW on for an interview and a live session in support of their pop montreal show with LITURGY and CAVE going down at Il Motore on Wednesday Sept 21. Aim low released a 2 track epic  ep of droning effected guitars, bass and voice called Foulards at the beginning of the Year. They have been working on some new stuff, developing their approached to structured improvised music making.